Titre VO
Who Wants It More ? 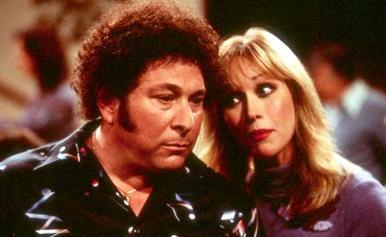 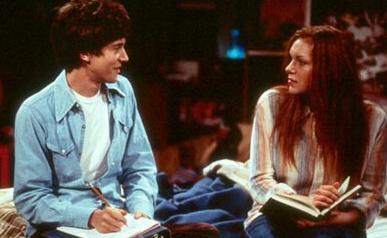 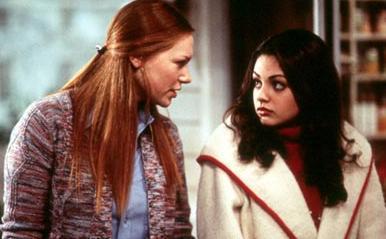 Eric and Donna are getting dressed

ERIC: Donna, I'm so glad you're my study partner. Because you make learning fun.

DONNA: Okay. Well, no more study breaks. We have to get this report done.

ERIC: All right. Fine [Clears Throat] Okay. A report on the current state of U.S./ Soviet relations. Okay, we need a title.

They look at each other and make out again. A little later they're getting dressed again

ERIC: You know, Donna, I lost my underwear. But... whatever.

DONNA: Okay. Seriously, we need to get some work done.

ERIC: Donna, I couldn't agree with you more.

DONNA: Okay. Right now, with a push of a button... the two superpowers could condemn us to painful, fiery deaths.

They look at each other and make out again. They come out of Eric's closet

ERIC: Okay. Seriously, we gotta do this thing.

ERIC: Uh, right. From now on, all business.

DONNA: The arms race began with the massive buildup of bombers by the Soviet
Union.

DONNA: No, they didn't. What about the bomber gap?

ERIC: Bomber gap? What? That's so cute (he writes) Bombers by the United...States.

He looks at Donna and wants to kiss her

DONNA: What are you doing?

DONNA: Get bent (she pushes him and he lands next to his bed)

DONNA: Eric, I can't relax 'cause you're wrong, and I'm right.

ERIC: Okay. Okay. I think we need to clear our heads with a nice study break.

DONNA: Eric, knock it off. I'm not in the mood for a stupid study break.

ERIC: What? Why? Because I disagree with you?

DONNA: It has nothing to do with that.

ERIC: Really, Donna? Because up until now, we were going at it like rabbits who
had just gotten out of prison.

ERIC: Wait. So what are you saying? You're gonna hold out on me until I agree with you? Because that's not gonna work, Donna.

DONNA: First of all, I'm not holding out on you. And second of all, if I did, it would so work.

ERIC: Okay, well, you know what? I think that is what you're doing. So try this dress on for size! I'm cutting you off! Yeah!

DONNA: Is that supposed to be a threat?

ERIC: Supposed to be. Yeah.

DONNA: Okay. If you wanna do this, we'll do this. But you're gonna cave, and I'm gonna laugh. Yeah! (she leaves)

Hyde and Kelso are playing a game. Kelso comes bursting in

HYDE: Oh, my God! What an unbelievable coincidence. I was just telling Fez about how dumb you are!

KELSO: Okay. No. So I'm out in the field, right? And there it was. It was in the air, and it had lights, and it was, like [he makes a whirring noise]

HYDE: Hang on, Fez. Kelso. Remember that time you thought you saw the Abominable Snowman?

HYDE: Do you remember what it turned out to be?

KELSO: Just a regular snowman. Guys, come on. Let's go out to the field. It could
come back.

HYDE: You think I got nothing better to do than stand in a field freezing my 'nads off?

FEZ: Hey, who wants to help me connect the dots?

Red is sweeping the driveway and hears a motor roaring. Kitty comes out


KITTY: What is all that noise?

RED: Oh, Bob's cutting down a tree in his front yard.

KITTY: By himself? Doesn't he know that's incredibly dangerous?

RED: Yeah, but you know what they say about Bob: "He's stupid."

KITTY: Oh, Red. Is that any way to talk about a friend?

Red looks up and sees Bob's tree coming at him

Soft organ music is playing. Red is lying in his coffin. He wakes up. Only Kitty is
sitting with him

KITTY: Oh, but he just feels super bad about it.

RED: Mm-hmm. So, where is everyone?

KITTY: Boy, you can hardly tell where your head was crushed.

RED: Where are all my friends?

KITTY: You don't really have any friends, Red. You know, it's-it's an unfortunate side effect of telling everybody to (whispers) to stick it up their butts.

RED: Yeah. Gee, I guess you're right, Kitty. Maybe I should have been nicer.

Red snaps out of his fantasy, the tree just missed him. Bob comes running up to him

RED: Bob... I never thought I'd say this but I'm glad you're my friend (he hugs
Bob really tight)

On the top Donna and Jackie are sitting on the porch, Jackie is doing her nails

Hyde and Eric sitting on the sofa in the basement. Hyde is flipping through a magazine

ERIC: Knock it off, Hyde!

JACKIE: Donna, is there something you need to talk about?

HYDE: Oh, crap. Do you need to talk about something?

DONNA & ERIC: Can you keep a secret?

HYDE: Yeah. Unless I can burn you with it later.

DONNA: I'm holding out on Eric.

ERIC: I'm holding out on Donna.

JACKIE & HYDE: So, how long has it been?

DONNA & ERIC: Three of the longest days of my life. Maybe I should just cave.

HYDE: Hey, if you cave, she owns you.

JACKIE: When he caves, you own him.

ERIC: Yeah, but there's no way she wants it as bad as I do.

HYDE: Can you blame her?

DONNA: I think I want it more than Eric.

JACKIE: Donna, sex is how we control men. If they ever find out we want it too
we'll never get jewelry again.

HYDE: Secretly, I believe they like it as much as we do.

ERIC: Oh. You and your crazy conspiracies.

Hyde is building a mountain of mashed potatoes. Fez, Kelso and Kitty are watching him

KELSO: Hyde, what are you doing?

HYDE: This means something. This is important.

KITTY: Well, this is a close encounter of the potato kind. Ahahaah. I'm sorry.

RED (coming in): How's it going, guys? Good to see you all. Kitty, I've been thinking. It might be fun to have our friends over for a party.

KITTY: Okay. Well, I just....I have never heard you use the words "fun," "friends" and "party" all in the same sentence.

HYDE: I have, Mrs. Forman. For instance, "Eric, I had fun ruining the party for you and your friends."

RED: Yeah, that was fun.

KITTY: Well, I think a party is a great idea, Red. Great. Then it's settled.

Knock on the door. Eric opens his bedroom door

DONNA: Hello, Eric. I have come to work on our report.

ERIC: Excellent. May I take your coat for you?

ERIC (thinking): Holy crap! She is so sexy. Be strong. Fight back. Use the look.

DONNA (thinking): Oh, no. Not the look. It's so-Wait. I find this hot? What is wrong with me? Come on, Pinciotti. Counterattack (she throws her pencil on the floor) Oops.

DONNA (thinking): Oh, the ear! Damn him! Wait. Must win this for womankind.
Must crush Eric.

ERIC (thinking): Red alert. She is touching your thigh!

KITTY: Donna, your mother's on the phone.

KITTY: So Eric, everything all right?

Fez, Kelso and Hyde are lying on their back in a field. Kelso is humming the theme From Close Encounters Of The Third Kind. Fez and Hyde join him

LEO (laying himself down): Hey, dudes.

HYDE: Leo, what are you doing here, man?

KELSO (pointing to the sky): What's that?

LEO: It's a Twinkie wrapped in chocolate, man.

FEZ: It's just a plane. They're all just planes.

HYDE: Of what? That planes can fly?

LEO: I saw a U.F.O. Once, man. It was awesome. It just hung in the air. Then it sent me a message... in big, bright yellow letters. It told me I was gonna have a good year.

HYDE: Did this, by any chance, happen at a football game?

LEO: Yeah, man. And the weird thing was, I was the only one freaking out about
it. Wait a second. Good year? Ah, it was a terrible year, man. Stupid aliens.

Red's party is in full swing

BOB: Hey, Red! I was just telling Tony here how I almost killed you with a tree.

TONY: Ooh-hoo-hoo. Close call like that can really make you think, huh?

RED: You bet. You know, it's like I was upset that you hadn't returned my hedge
clippers.

TONY: Oh, shoot. I think I gave those to my brother-in-law.

RED: You did, did you? Oh, well, that's okay. It's not like you stole them or anything. You just took 'em and never returned 'em...which is different somehow [Forced Chuckling] Ha!

Midge is getting ready to go out. Donna is sitting at the table

MIDGE: What do you mean?

DONNA: You know, I mean, do you ever...not have sex with Dad?

MIDGE: Sure! I'm not having sex with him right now.

MIDGE: You can do that?

DONNA: Yeah. I just wonder if it's wrong.

MIDGE: Donna, you're saying by my not having sex with your father I can get him to paint the bathroom?

DONNA: Yeah. But don't you think it hurts the relationship?

Red is talking to another "friend"

MAN: And two of them to turn the ladder. Hahahaha!

RED (forced laughing): Yeah. Yeah, those Polish people- they sure don't know much about light bulbs.

MAN: Exactly. Two of them turn the ladder....

MAN: So Sammy Davis Jr., the pope and this Polish guy are on a plane, see?
There's only the one parachute.

TONY: Hey, Red, seeing as how you're dead and all, can I have those shoes?

KITTY: Get away from him! Red, honey, your funeral's a big hit. You are corpse of the year.

RED: Just put the lid on, Kitty. I need some freakin' quiet.

Back to the Forman living room

KITTY: Are you having fun?

LEO: But these naked ones of you are far more interesting, man (Hyde and Fez jump up and take them from Leo)

KELSO: What? Those were on that roll?

KELSO: You guys are so immature.

KELSO: I was a fountain!

Kelso grabs the pictures and runs off

LEO: Hey, you guys wanna see the other set he brought?

Eric and Donna are working in their report

ERIC: Donna, we've gotta get this thing done. This report is due in six hours.

DONNA: Yeah, Eric. I've been thinking about it. This whole Cold War standoff? It's ridiculous. Neither side is getting what it wants.

ERIC: So, what you're saying is by hurting each other, they're actually hurting themselves.

DONNA: Yeah. It must be incredibly frustrating for both sides. Both of them are just building up and building up. The urge to launch a first strike must be overwhelming and painful.

ERIC: You know, Donna, in a lot of ways, what we're going through here is just like the Cuban missile crisis except in our case, it's a missile crisis.

DONNA: Eric, you're right. It's time for détente (they kiss)

ERIC: Wait. What about our disagreement?

ERIC: It's just- I can't believe you caved. Wait until I tell Hyde (Donna gets up) No. No! Where are you going?

ERIC: You're lying! Donna, we're past the point of no return here.

DONNA: Eric, girls don't have a point of no return. So see you tomorrow.

DONNA: Oh, thank God, 'cause I was just bluffing.

They start to kiss

During end credits: some pictures of Kelso undressing...