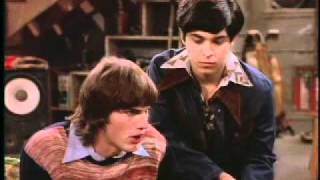 
Eric: Laurie's bus isn't here yet. Dad, can we get in the car and turn on the heat? I'm freezing!

Red: I'm not wasting gas just so you can be comfortable.

Eric: Can we at least go wait inside?

Kitty: I'm not going in that bus station with those people!

Kitty: Oh Eric, I forgot to tell you. Your sister's bringing a friend home, so you'll be sleeping in the basement.

Eric: The basement? They should sleep in Laurie's room!

Kitty: Oh, and Red, I've been thinking. Maybe this Thanksgiving, we should skip the big turkey. Small ones are on sale at Piggly-Wiggly.

Red: This family doesn't scrimp on holidays. Can you imagine my mother sitting down to a chicken!

Kitty: Red, your mother won't eat my cooking anyway so that won't be a problem!

Eric: Dad, they should sleep in the basement!

Kitty: Red, last Thanksgiving, she said her jaw wasn't strong enough to chew the turkey. And that was a magnificent turkey!

Eric and Kitty start each arguing about their problems.

Red: Alright, that's it, hold it! Now Kitty, don't get worked up over my mother and you, you're sleeping in the basement! And we're all having a happy damn Thanksgiving!

Laurie and her friend, Kate come out of the bus station.

Laurie: Mommy, daddy, this is Kate!

Red: Hi sweetheart! Oh, let's get in the car, you must be freezing!

Kate: So, you're Eric. Your sister didn't tell me you were so cute! We are going to have so much fun this weekend!

Eric: Hey you can sleep in my room!


Red: Get Kate settled into your room.

Eric: That's such a good idea. That'll give you a chance to tell dad about that professor you're dating!

KATE: Gosh, I hope it doesn't get too cold tonight. I sleep practically naked.

Midge: What's that pet name she has for you?

Kitty: Whore. Oh, you know she doesn't bother me as much as she does Red, and he's tense enough with Christmas coming up and him only working part time.

Kitty imagines a lathered up Bob. She snaps herself out of it.

Laurie: Mom, Grandma's on the phone!

Kelso: Of course she's hot. All college girls are hot. I mean we've all seen the brochures, right?

They both get up and go stand near the jukebox.

Jackie: Okay, are you okay?

Jackie: Donna, how can you be okay? There's a college woman sleeping in his bed.

Donna: He's sleeping in the basement.

Donna: So what do you guys wanna do?

Eric stares at the ketchup on his plate which has become Kate.

Kate: Eric, I hope it doesn't get too cold tonight. I sleep practically naked.

Kelso dips a fry in the ketchup and the fantasy stops.

Eric: Yeah, well, I guess I'm just gonna, just gonna, I'm tuckered out, so… I might as well go home !


Red: So, tell me about school.

Eric: That's good because they just opened up that big philosophy factory in Green bay.

Red: Eric, what did I tell you about being funny?

Kitty:I wonder if the Pilgrims were clever enough to put peanut butter in their celery.

Red: Kitty, could you get that? I'm fixing the drawer.

Kitty: Oh dear god. Your mother has already called me five times this morning Red. You answer it.

Red: Kitty, I don't wanna talk to her.

Kitty: She gave birth to you.

He hands Kitty the phone.

Kitty: Hello mother Forman. Uhuh. Just like I told you, I don't know like a half hour ago, the kids will be there at noon to pick you up. Yup you're right. I need to work on my attitude. Bye then!

She hangs up on her.

Kitty: You know, I could've married Bill Bauer. His mother was dead.

Bob: Red, what a surprise to run into you!

Bob: I, actually, Red, I just wanted to ask you a favor. My appliance store gets real busy all over the holidays and I could use a little help down there.

Red: Oh, you're offering me a job.

Bob: Now, I don't want you to get the wrong idea. This is not charity.

Bob: No, not charity.

Bob: Midge, he yelled at me!


Kate is playing with Eric's G.I Joes. Somebody knocks on the door.

Eric: Um, I was just coming up here to get something to sleep in. So, I, I guess I'l see you later.

Kate: You can stay and talk a minute if you want.

Kate: Yeah, have a seat. So, have you thought about where you wanna go to school yet?

Eric: Oh. Well, I like your school. I found that it was really…

Kate kisses him. Eric starts pulling her down on the bed when she breaks the kiss.

Kate: I have to go to bed now.

He starts getting up and he sits down again.

Eric: Could just… one second…

Eric, in his head: Okay, baseball, Vietnam, Richard Nixon, Pat Nixon, Pat Boone, the girl that gives the weather, no, no. Okay, jellyfish, really big spiders, come on, dig deep, dig deep, okay, the day we backed over Skipper in the driveway. Instead of going to the county fair, I had to bury him in the backyard.


Red is snoring lightly. Kitty pinches his nose and he wakes up, gasping for air.

Red: Well, you're up awful early.

Kitty: Well, luckily, I had the phone ring when your mother called at five o'clock this morning.

Kitty: Oh, before I forget, Laurie told me what she wants for Christmas. A portable T.V. for her dorm room.

Kitty: Maybe Bob can get you a good deal on one from his store.

Red: I don't need any help from that damned Bob. You know what he did yesterday? He offered me a job.

Kitty: He did? Oh, we have to move away from such an evil man.

Red: Hell, you're a lot of fun in the morning!

They both start laughing.


Fez: So you made out with a college girl?

Eric: Okay, she like jammed her entire tongue into my mouth and you wouldn't think a girl had like that much tongue.

Kelso: That is great!

Kelso: Yeah man, the right thing to do is to juggle them both until it all blows up in your face.

Eric: Look, you guys don't understand. I can't hide anything. The minute she looks at me, she's gonna know.

Donna comes down the stairs.

Donna: Hey, what are you guys talking about?

Eric: I kissed a girl.

Hyde, Fez and Kelso get up, insulting him and leave.

Eric: You know that friend my sister brought home from college?

Donna:Why are you telling me this?

Eric: I, I feel guilty because it was like really kissing.

Donna: So, what we do isn't really kissing?

Eric: I thought you should know considering that you and I have a thing. Right?

Donna: Mad, no. Why should I be mad, in fact, you can kiss whatever you want. Start with your own butt!


Red: Why are you here? Why are you always here? It's Thanksgiving, don't you have families?

Donna passes them without even looking at them.

Kelso: Eric made out with Kate.

Fez: Your son is a whore!

They get out. Eric comes in.

Red: Eric, now Donna came through here looking very upset. Would you have any idea what that's about?

Eric: I have no idea. She seemed fine when we - um, you already know.

Red: Of course I know. Donna is such a sweet kid. How could you do this to her?

Eric: I don't know. It seems like bad things are always happening to me, like I have bad luck or something.

Red: Son, you don't have bad luck. The reason that bad things happen to you is because you're a dumbass. Now fix it!


Donna and Midge are sitting at the table. Eric comes in.

Eric: Look, Donna, please come to my house for Thanksgiving desert. Everyone's gonna be there, you always come. Please don't let some stupid thing that I did wreck that.

Donna: Well, I can't depend on you, so why should you be able to depend on me?

Eric leaves and Donna slams the door shut behind him.

Midge: Oh you, of course I meant you!

Kitty: Now, is everything on the table? I still feel like I forgot something.

Kitty: Oh my god, I forgot your mother! Go!

She runs to the kitchen and picks up the receiver.

Kitty, into receiver: Hello Mother Forman! No, I didn't forget you! Oh, I don't know, the Kids left a half hour ago to pick you up. I can't imagine what's keeping them.

Kitty hits on the table.

Kitty, to Red: Put that back.

Eric: The Toyota's blocking the car, I need the keys!

Kitty: Hold on one teeny tiny second. For the love of God, move!

Kitty, into receiver: Are you sure they're not there? Look out your window. Now, do you have your glasses on?


Eric and Laurie come back without Grandma.

Laurie: She's not coming. She said she's going to cousin Joe's for Thanksgiving.

Laurie lights a cigarette and Red stubs it out.

Eric: Actually, she said it was a shame she couldn't spend what might be her last Thanksgiving with her family. But she does hope we all enjoy ourselves.

Kitty: Well, you know what? That's just fine. I don't need to kiss some old lady's A.S.S on my holiday. You heard what I spelled.

Phone keeps ringing. Eric begins getting up to answer and Red snaps his fingers for him to sit back.


Red and Bob are eating pie on the couch. Both end it, put their plates beside them, rub their stomach, put their feet up and open little bit their pants.

Red: So, you give an employees discount down there at your store?

Red: Does that cover anything like, oh, say, portable T.V.s?

Bob: Good, I'm glad to hear it Red. You know you'll have to call me Mr. Pinciotti at work.
Red looks at him, angry.

Bob: Oh, I got you good that time!

Donna: Only came because my mom made me. Okay?

Hyde comes over with two plates of pie.

Hyde: Hey Donna, alright, good to see you! Got you some pie!

Donna gets up and leaves.

Hyde: What, I didn't kiss her!

Eric runs after her.

Hyde looks at the two plates of pie and goes to the couch.

Hyde: Hey there Bob, you wanna piece of pie?

Bob looks at it and unzips his pants more.


Donna comes in, slams the door behind her and takes off her coat. She throws it on a chair. Eric comes in and heads towards the livingroom.

Donna: Hey, don't get all tough with me!

Donna: I'll start, get out!

Eric: What do you want me to say? I already apologized. You just wanna forget about us because I kissed some girl?

Donna: Why did you do it?

Eric: Well, I have on pretty good authority that I'm a dumbass.

Donna: So, you liked it?

Donna: No would've been a better answer.

Eric: Donna, look, that kiss was great and if I could take it back, I would because it's not worth ruining what you and I have.

Donna: Eric, you are a dumbass!

Eric gets closer to Donna and kisses her. The kiss grows stronger and Donna holds on to him. They break the kiss.

Donna sits down and Eric opens the door.